`NodeType.isError` for a large and valid JSON document

From the support I received in Check JSON syntax using language pack - #5 by transform, I use the following to validate a JSON document.

When copy/pasting valid but large JSON document, around 350 (23,384 characters) lines long, the code above detects an invalid JSON document. NodeType.isError is true.

However, just placing the cursor at the end of the JSON document and inserting a space character, causes the code above to re-run and validation passes.

This problem does not occur with smaller JSON documents.

I have the SyntaxNode and NodeType but because they contain circular references I can’t just JSON.stringify them into this post.

Oh, that’s a good point. The parser will delay parsing when it takes too long, and insert error nodes at the end of any constructs that were unfinished at the point where it stopped. You may need to add a rule that when the tree doesn’t span the entire document, you ignore error nodes near its end.

Compare syntaxTree(state).length to state.doc.length. You only need to ignore the errors near the end of the document.

I’m finally looking at implementing this and realise now that I don’t fully understand your recommendation.

Assuming the tree has length 16,334 and the JSON document has length 117,968. The first error node has .context with 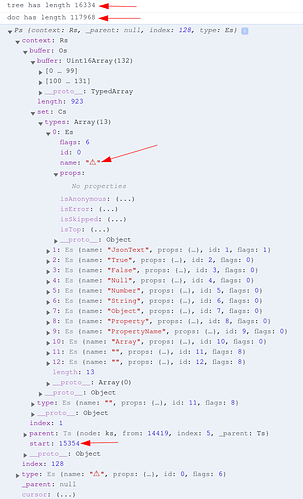 Yes, that should have said ‘near the end of the tree’ (if the tree is smaller than the document).

Question. Given the tree is smaller than the document, why would is it necessary to inject error nodes at all? Surely the optimization comes from the fact that not all of the document is represented in the tree?

why would is it necessary to inject error nodes at all?

To indicate that they are not full nodes, but have been cut short artificially.

Thanks. And on the other question; what defines “near” the end of the tree? Without a definition I could ignore real errors.