After the . I use CTRL-SPACE to show the dropdown with columns and keywords but it doesn’t always work:

SELECT * FROM offerte o
where o.

SELECT * FROM offerte o, bestelling b
where o.

SELECT * FROM offerte o,bestelling b
where o.

Notice the omission of a space after the comma seperator between the two tables.

I thought I would give @marijn a weekend time off so I made a quick patch:
replace old eachWord function in sql-hint.js with:

Hope I didn’t break anything

Found another hard to find bug, this applies to patched and non-patched version (see my post above).
The dropdown doesn’t always show up. Here are some testcases, all where cursor is located at the . and then CTRL-SPACE is pressed:

Doesn’t work (in both versions):

Does work in both versions:
10. "SELECT * FROM Plant p, offerte o
WHERE o."
Notice the enter after the first line.

. Took me quite some debugging but I found an very corner/edge cased bug in his convertNumberToCur(num) function which converts a number back to a Pos. Well in 90% of all input this function works ok but when it’s ends with 1 or more zeros the conversion to Pos fails. Thats why testcase 3a doesn’t work and testcase 3b does! The point . is exactly on a multiple of 10 position.

Here’s the fixed version which fixes all of the above problems:

Note that the pile of hacks that is sql-hint.js was not written by me (though I did clean some of it up). Also, if we consider the fact that you’re using a complicated piece of software built and maintained by me over the past 9 years, I’m not sure who owes who a beer.

Anyway, thanks for looking into these. Could you submit a pull request (preferably with additional test cases in test/sql-hint-test.js) on github?

Well beers waiting here… Let me know when you’re in Eindhoven. I am very grateful for this great piece of software.

I am not yet full into all GIT features like pull requests and testcases so it can take a while. Very busy on other projects right now…

After listing the columns of a table…: 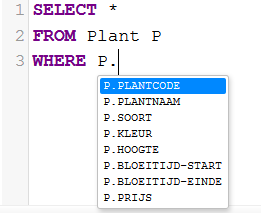 …and then typing the columname for example PL…: 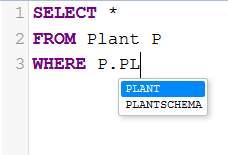 … you would expect the columns PLANTCODE and PLANTNAAM instead of (again) the tables PLANT and PLANTSCHEMA.

Well it’s not a bug but make sure the MIME type you uses has support set including ODBCdotTable. See sql.js

@Marijn: maybe a good idea to document this somewhere?