Width of SQL hint dropdown in Firefox is not always correct

Sometimes the width of the SQL hint dropdown is not sufficient enough to fit all visible items. Some items get clipped. It’s 100% reproducable. It only happens in Firefox. I tested in Firefox v46, IE v11 and Chrome
v50 on Windows v7 SP1. 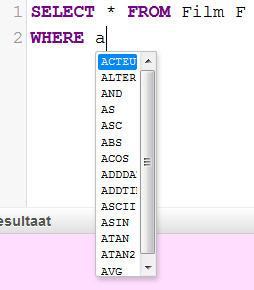 That happened on Chrome as well for me (maybe you’re on Mac where Chrome probably has magic overlay scrollbars). It’s a CSS issue, where there’s apparently no way to prevent an optional scrollbar on an absolutely positioned element from overlapping the content. I’ve added a JavaScript-based workaround in this patch.

Well the workaround is not working 100%. The blue highlight is fixed size when scrolling through the items.
In the screenshot you see that the last character isn’t visible. Indeed. I’ve added another patch to try and address this.

Thanks that did the trick!